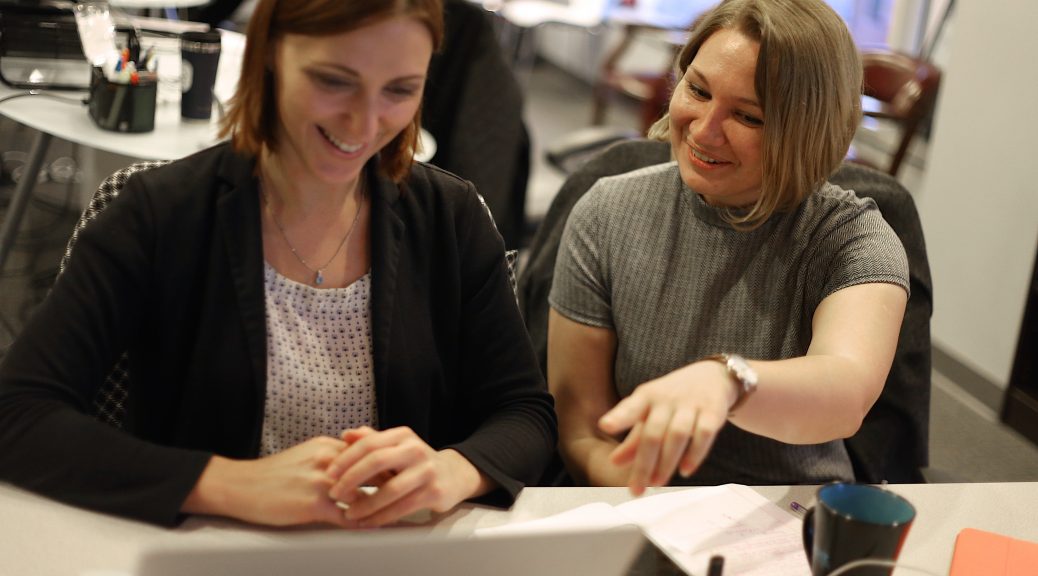 In the final two weeks of The Battle at the Nostradome—Aspire’s data modeling competition to predict glucose levels for diabetes patients—Aspire community members from abroad paid a visit to our Lancaster headquarters to get a little closer to the action.

A few members of Team Minsk, from our offices in Minsk, Belarus (naturally), have been working on building the best predictive model for glucose levels along with other projects here in our Lancaster Venture Lab for the past two weeks. Their 8-person team has been keeping the leaders on their heels with some impressive models that earned them 2nd and 3rd place over the past few weeks.

Data Scientists Christina Butsko and Darya Vlasova say they’ve been having fun with the contest. The rivalry with other teams, along with the strict weekly deadlines, has really stimulated progress for their team, they say. Team Minsk has shown continued improvement each week, as have many of the other teams.

“We’ve been gaining a lot from the competition,” Butsko says. “We started with a very simple model, but we were able to put some layers into it and combine it with other models.”

Now they have something viable, Vlasova says, and most importantly it has shown stable performance over the weeks, which is one of the key factors when assessing a model.

They tried a number of approaches, combining factors like basal and bolus insulin injections, carbohydrate intakes, number of steps, and heart rate.  Soon they honed in on insulin intakes to predict insulin’s level of decay in the human body.

They also tried a new modeling approach, combining a linear model with a nonlinear one.

Vlasova thinks that move helped them to finally arrive at a more sophisticated model, one that could potentially be useful for diabetes patients as they plan their insulin regimen.

Team Minsk should know all about sophisticated models. Their team was partly responsible for the development of Aspire’s A2i, an advanced search optimization tool that intelligently finds the best parameters for predictive models. It’s a tool that many of our teams have been using to test their own ideas in the competition.

Max Reshetilov, Director of Technology at our Minsk office, laid the foundations for A2i when he built a program for optimizing model parameters for Disfa to predict financial markets. Although the platform was built only for one specific sector, Aspire founder Essam Abadir realized that there could be great value in a more generalized version of the tool that could be applied to ventures in any sector.

“This is how the idea for A2i was born,” Butsko says. “To create a tool that would be able to process any kind of data and to assess any kind of algorithm.”

That has been one of the goals of The Battle at the Nostradome, to test whether A2i can truly be applied in a general way to any kind of problem.

We’re still assessing results of the past few weeks, but so far teams have found that A2i makes model building a lot easier.

“That’s the power of A2i,” Vlasova says. “It can be applied to anything.”

We’d like to congratulate our Chief Science and Analytics Officer Rafael Alcaraz for recently being named to the Henry Stewart’s Applied Marketing Analytics editorial board. As a member of the prestigious editorial board, Dr. Alcaraz will lend his expertise to peer-review published content alongside other big-name professionals and academics for the Applied Marketing Analytics journal—Henry Stewart’s major new professional journal. Henry Stewart Publications is a leading publisher of peer-reviewed vocational journals that combine contributions from senior practitioners and consultants from the world’s most respected corporations with research from leading academics in the field.

We’re proud to have a well-respected authority on analytics like Rafael managing and mentoring our Science and Analytics team here at Aspire, and we’re glad he’s being recognized for his expertise. At Aspire his deep knowledge of big data and machine learning have been key to designing a technical roadmap for Aspire’s machine learning tools. A Ph.D in Econometrics and a former consultant for a vast array of industries ranging from academics and government to banking and retail, and we’re sure Dr. Alcaraz will be a valuable addition to the editorial board at Henry Stewart Publications. 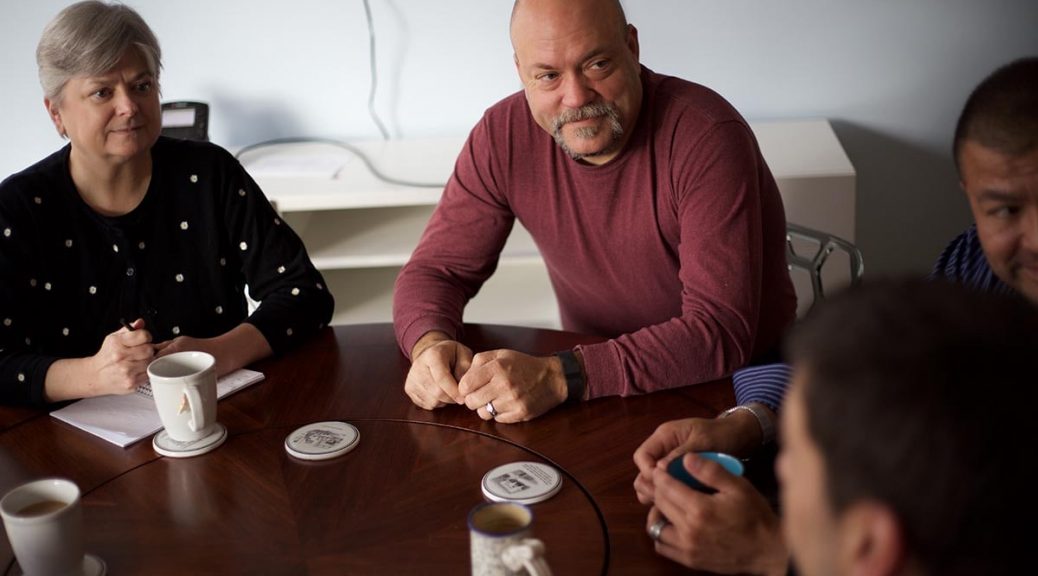 When you have the tools to quickly test any number of ideas for building a predictive model, new ideas from just about anyone can become valuable input.

After two weeks of competition in the Battle at the Nostradome, the leading teams are finding that Aspire’s machine learning tools like A2i and PRDXT allow people from a much wider variety of disciplines to make valuable contributions for predictive model building.

“If you’re able to synthesize the technical approach to the conceptual, anyone can engage,” Aspire’s Entrepreneur in Residence and Wylei CEO Mike Monteiro says. He’s the leader of Team Pluto, the winners of the first and second weeks of the competition to build a model that predicts glucose levels for diabetes patients. The rest of Monteiro’s team are from Aspire’s finance department and the market research department.

Monteiro is an expert when it comes to machine learning and predictive software, but thanks to A2i he was also able to easily utilize input from others with no experience in predictive modeling.

It was a winning combination—beating out other teams full of data scientists, software engineers, and others with the technical know-how.

“We made a list of new things to try, and A2i simplified the process,” Monteiro says.

If you only have one idea from one person, it’s easy to test it out on your own, Monteiro says, but when you have ten people giving you ten ideas about predicting glucose levels, the problem becomes much more complex. Those ideas can interact with each other in an immense field of possible combinations, which is where A2i comes in.

“A2i lets you define a massive combinatorial search space and it says, ‘no sweat, I got this,'” Monteiro says. “It helps figure out what combinations of ideas are the best combinations.”

So what exactly is A2i?

Essentially, Mike Monteiro says, to use the simplest terms: it’s a search tool.

For those unschooled in artificial intelligence, search and optimization is a subfield of AI where machines really excel.

Search tools can be used to sift through an astronomical number of possibilities very quickly, allowing us to arrive at answers to problems that would otherwise be impossible with human reasoning alone.

But what’s unique about Aspire’s approach to search and optimization is that we’re using it to find the best possible approach to machine learning (another subfield of AI); or in other words, we’re using one category of AI to modify another category of AI. A process that could be called meta-artificial intelligence.

In the same way that humans use different parts of the brain in combination, we’re using different subfields of AI in combination with each other to create systems that can easily adapt to new information.

Although the approach may not be unique from an academic perspective, Monteiro says, Aspire is one of the first to operationalize it.

The goal, Monteiro says, is to arrive at a process that will be easily transferable to many different problems, well beyond the specific problem of predicting glucose levels for diabetes patients.

“The vision is that you can leverage the power of machine learning and the scale of the cloud to build the next generation applications without having to be a data scientist,” Moteiro says.

And judging by Pluto’s success and their ability to engage people from other nontechnical disciplines, we’re making progress to realizing that vision. 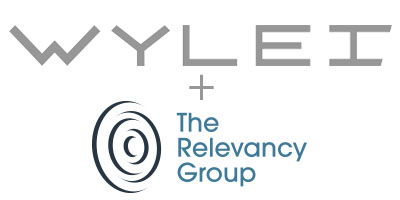 The future of email marketing is here, and we’re excited that Aspire venture Wylei is helping to lead the way.

If you want to learn how Wylei’s innovative approach to email marketing is rendering classic tactics like A/B testing obsolete, join our Entrepreneur in Residence Mike Monteiro, CEO of Wylei, and Chris Marriot, VP of Consulting at The Relevancy Group, in a webinar discussion on Thursday, Nov. 19.

They’ll be discussing the next generation of tactics that leading email marketers like Dell, Marriott, and Adidas are using to breathe new life into email marketing. With new solutions that are far easier to implement and far more effectual than A/B testing, they’ll explain “Why A/B testing emails is for suckers.”

An expert in big data, predictive analytics, and machine learning, Mike Monteiro is a leading resource in the Aspire community and he’s keeping Wylei on the vanguard of digital marketing.

Chris Marriott is a seasoned expert in digital marketing, a columnist, and a principal consultant at The Relevancy Group. TRG is a well-respected market research and consulting firm dedicated to educating the market on emerging trends and the tactics needed to meet the changing market landscape.

Register here to join Monteiro and Marriott on Thursday, Nov. 19, at 2 p.m. EST