Put it to the Test 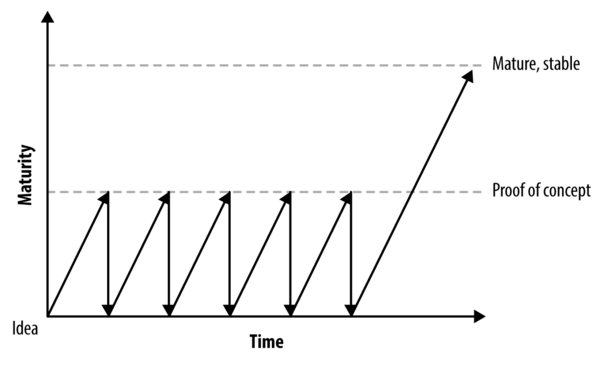 No startup is immune to getting carried away with excitement about their ideas, but when it comes to developing those ideas into a real world product, all too often startups forget to ground themselves by testing their assumptions first.

In an interesting article from Y Combinator’s blog The Macro, author Yevgeniy Brikman argues that for startups to be more successful, they must engage in a process of repeated trial and error that makes incremental, but tested, progress towards the end goal: releasing a successful product for market.

Too often, Brikman says, startups spend months, or even years developing a Minimal Viable Product without finding out first whether anyone would actually be interested in the product.

According to a study of 101 failed startups conducted by CB Insights, an NYC data research company, the number one reason startups failed was that there was “no market need”, which accounted for 42 percent of failed companies. The number two reason, at 29 percent, was that the company “ran out of cash”.

The solution? Put your product in front of real users as quickly as possible, no matter how incomplete, Brikman says. Most likely, you’ll have to go back to the drawing board over and over again, but the trial and error process is the surest way to get to where you want to go, without wasting vast amounts of time developing something that nobody wants.

At Aspire Ventures, we’re taking a similar approach as we develop software solutions to help diabetes patients manage their disease. With periodic “sprints” followed by real-world feedback, we’re making sure real consumers are keeping us on course.

Last month, we completed a “design sprint” where we developed a concept, designed a product, built a conceptual prototype, and got customer feedback in a 5-day period.

That resulted in plans for a new mobile application, Soft CGM, that uses personalized algorithms to allow diabetes patients to continuously monitor their glucose levels without actually using a continuous glucose monitor. Instead, patients can get accurate glucose predictions based on other, less intrusive inputs like health trackers, finger sticks, and manual data inputs. We already laid the technological groundwork for Soft CGM in the previous year when we applied our machine learning platform A2i to diabetes management. During that period, we found that we could accurately predict glucose levels with non-CGM data, but moving forward with product development relied on a few assumptions that first needed to be put to the test.

The most important assumption is that users will actually be willing to enter the necessary data into a Soft CGM system such as finger stick data, carbohydrate intakes, and health tracker data. And for the app to work correctly, users would also need to input data during a “training period” to allow the system to calibrate to the individual user.

At the end of our first design sprint we received positive feedback from a group of diabetes patients that such a product would be very useful, and that they would indeed go through the training period and input the necessary data if the system provided accurate predictions. While that was indication that we should move forward with the project, we can’t claim it as a total victory, because humans are by and large terrible predictors of their own behavior.

Which brings us to the next step. To thoroughly test our assumption, we’re now in the midst of a two-week development sprint to build a useable prototype. That prototype will be tested internally by Aspire team members who have type 1 diabetes to see if users can actually follow through and enter the data for the benefits of Soft CGM. If internal testing goes as hoped, we’ll begin refining our product for clinical trials.